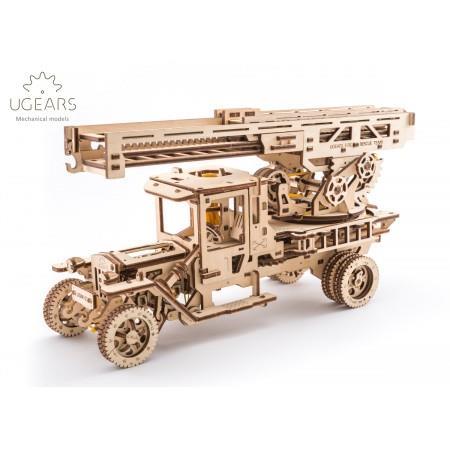 The Fire Truck is a self-propelled wooden model from the UGEARS Trucks collection. The Fire Truck functions like a real Rescue&Fire Truck with turning foot, moving apart & ascending ladder, which transforms into real crane with hook.

The Fire Truck is equipped with the retractable 3-Section Fire Ladder on a rotating platform. Length when fully extended – 70cm. The Fire Ladder has several controls. Press the lever and lift up the ladder. Turn the platform to the right or to the left. Fix the selected position with a special ratchet. All three sections of the ladder are extending ahead. Ascend the ladder and you’ll get a real crane with hook at its end.

There is even a little ladder to help Firemen to climb on the truck in few seconds. Like in a real Fire Truck, it is mounted on back.

Based on UGM-11 Truck, the Fire Truck is equipped with a four-cylinder rubber band engine and moves on its own forward in the “drive” mode and back on “reverse” transmission mode. Start the engine in 'idle mode' and look at four pistons, which move realistically under the folding hood.